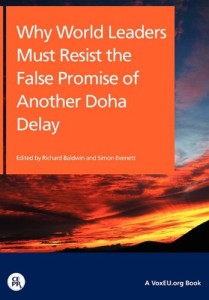 The world trade system is at a fork in history’s road; WTO members cannot avoid Making a choice.

Published ahead of the 29 April 2011 meeting of WTO members in Geneva, this book argues that if the current deadlock – mainly between the US and China – cannot be broken in 2011, no resolution is likely before 2020. US Congressional politics will be much rougher in 2013 – scared by divisive debates over spending and taxes – and the new Chinese government can hardly afford to start off with major tariff concessions to the US. Think of 2013 as 2011 with less goodwill Internationally, more poisonous politics inside the US, and a Chinese leadership that must prove its toughness. Breaking the deadlock would require an expanded negotiating agenda, but this would add years to the talks. The false promise that it would be harmless to allow Doha to languish for years is deeply dangerous, at best. The authors in this volume – trade experts from across the world – identify the perils of allowing Doha to flounder, and the hard choices governments must make to break the deadlock.

This entry was posted in books. Bookmark the permalink.