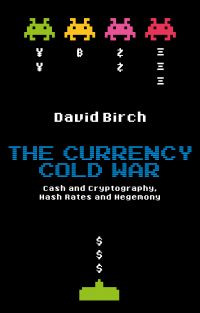 Money is changing and this may mean a new world order. In this new book, David Birch sets out the economic and technological imperatives concerning digital money, discussing the potential impact of it and the tensions involved — between public and private and between East and West — to contribute to the debate that we must have to begin to shape the International Monetary and Financial System of the near future.

Further information – including the preface of the book in full, as well as its table of contents – can be found on a dedicated website for the book, here: thecurrencycoldwar.com

The book will be published on 27 May 2020 as a hardback. It can be purchased by clicking “Buy book” above, or from any good retailer.

“No-one has put as much thought into understanding and explaining the exceedingly complex world that all these parallel economic, political and technological developments are creating for us than David Birch.” — Michael Casey (author of The Age of Cryptocurrency)

“Dave is right on the money, outlining the technological and geopolitical trends that shape future digital currencies. A timely analysis which urges us all to design our own smart and anonymous currencies before other nations or big tech players force us into using theirs.” —  Simon Lelieveldt (formerly with Dutch Central Bank and Dutch Bankers Association)

“No one knows more about digital money than Dave Birch, and his insights into where the world of digital currency sovereignty is going, will shock you. Our lives are about to change, radically.” — Jeffrey Robinson (expert on international financial crime and author of the worldwide bestseller The Laundrymen)

“How profound will the digital money revolution be? David Birch has written an insightful and provocative guide to the high stakes involved.” — Huw van Steenis (former Senior Advisor to Governor Mark Carney on the Future of Finance)

David G. W. Birch is an author, advisor and commentator on digital financial services. He is Global Ambassador for Consult Hyperion (the secure electronic transactions  consultancy that he helped to found), Technology Fellow at the Centre for the Study of Financial Innovation (the London-based think tank) and a Visiting Professor at the University of Surrey Business School. An internationally recognised thought leader in digital identity and digital money he was named one of the global top 15 favourite sources of business information by Wired magazine and one of the top ten most influential voices in banking by Financial Brand; created one of the top 25 “must read” financial IT blogs; was found by PR Daily to be one of the top ten Twitter accounts followed by innovators (along with Bill Gates and Richard Branson), was rated Europe’s most influential commentator on emerging payments by Total Payments and was awarded “Contributor of the Year” by the Emerging Payments Association.

His last book was Before Babylon, Beyond Bitcoin: From Money We Understand to Money that Understands Us (London Publishing Partnership), which the LSE Review of  books said should be “widely read by graduate students of finance, financial law and  related topics as well as policymakers involved in financial regulation”.

Dave graduated from the University of Southampton with a B.Sc (Hons) in Physics.

This entry was posted in books, lpp, perspectives. Bookmark the permalink.

2 Responses to The Currency Cold War: Cash and Cryptography, Hash Rates and Hegemony